Such a happy boy. 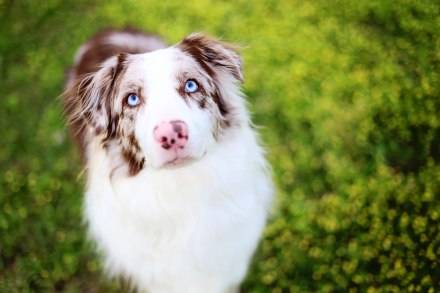 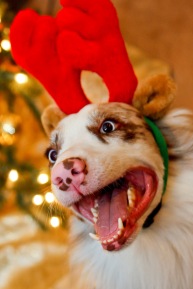 Meet Thor, our oldest Australian Shepherd. Thor is about 5 years old, but we’ve only had him since September of 2011. We adopted Thor from New Spirit 4 Aussie Georgia in 2011. Before he came to live with us, Thor was thrown into a shelter in North Georgia. He was skinny, had severe allergies, and was deemed “unadoptable” due to his “skin condition” and “toy aggression.” New Spirit pulled him from the shelter and saved his life. We are so glad his foster Mom then put him on Petfinder. I called her and told her all about us, how we wanted another dog, and that we would like to drive up and meet him. Apparently he had another adopter coming to meet him that same day, but she’d keep me posted. That afternoon, I got an e-mail saying that they just “weren’t a good match” and I knew then that he was going to be ours. We drove up to meet him in Atlanta, fell in love, and left with him sitting in our backseat. Thor is just a big teddy bear that loves to play. He is a big boy, weighing in at about 70 lbs, which is large for an Aussie. He’s a full blooded red merle with beautiful blue eyes. He’s extremely smart, loyal, and loves to play. His allergies are well-controlled with an over-the-counter antihistamine (chlorpheniramie) and he does quite well since he lives indoors. His favorite things are treats, nylabones, kong balls and playing frisbee.